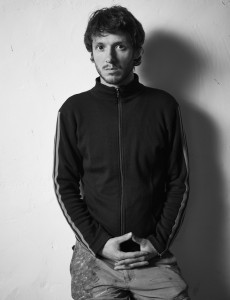 Ludovic is a French artist living in Budapest. He works mainly with paintings and for 2 years he started associating paintings with installation and objects. The main thematic of his work for the past 5 years has been around Childhood. He explores this life period, its contrasts, emotions, transitions and passions, that reflect our conditions of human beings.

Short statement about his actual works

His painting is like an accumulation of experiences, images and ideas; a mixture that he organizes in a simple chaotic way. When describing his work, he likes to talk about collage, superimposition of elements that tell stories. These stories are fluctuating between reality, fairytales and surrealism; on the canvas abstract brush strokes mix with figuration coming to build up these compositions.
Life appears as an oxymoron, a romantic contradiction creating a fragile balance which defines our thinking and deciding systems. This same game and system belongs to his process of creation and research.

The nature and plants are a natural  force; the discovery of Brazil and its forest emphasized the use of plants in his work. In a kind of magic, trees and plants find their way of perfect visual balance. Ludovic likes to see his paintings growing in this organic way and borrows some pieces of Mother Nature for his creations.

Antique pictures are often a base for his work. He delocalizes  these images and make an interesting timeless proposition.

Hungarian embroideries are an imprint of his own story, but also a powerful symbolic of culture and knowledge transmission between generations. Each region of Hungary had its own codes and drawings which were improving and passing from one generation to another. These drawings were exhibited on pieces of fabric; he uses it as a bridge between generations that erodes with time.

Animals are used in almost all fairy tales. They are the friends of our little ones and their imaginary stories. They also have a very strong symbolic presence of guidance in many cultures.

Ludovic Thiriez’s paintings tell a story in a similar way to a fairytale where the spectator can imagine a new plot. The Prologue series suggests going back to your childhood using memories and imagination.

Thiriez’s pictures explore a strange and fantastic world. He amalgamates some European and tropical plants, few animals from the forest, Hungarian symbols and some abstract gestures.  In the same way as the ivy on the wall, all these motifs grow organically on the canvas creating a balanced composition. The desolate background depicts an obscure and intriguing ambiance with neutral and austere colours contrasting with the agitated and vibrant world on the foreground.
Currently in residence in São Paulo, Thiriez adds more Brazilian flora in his paintings. He alternates between figurative elements and more graphic and geometric designs working in sequence between a meticulous and slapdash technique.

In parallel of theses ambiance’s works, Thiriez paints portraits of young children from the past. The naive kids’ faces look deep at your soul wondering about their life. They have hopes or fears about their future. Thiriez incorporates again Hungarian motifs to emphasize the passage to the adult age. The embroideries symbolize the bridge between stages of life where knowledge and culture are passed on to the next generation.

Thiriez creates a patchwork form his life experiences and influences. Born in France, he lived many years in Budapest where he got the inspiration from the Hungarian textile patterns. This is an old woman selling her own embroideries on a Budapest market who told Thiriez the story behind the different shapes and colours. According to her, Hungarian women created specific embroideries long time ago passed it through the generation adding their own experience. They were looking at the Nature and copied forms from   trees, flowers and other vegetal life. Hungarian embroiders created cloths with their own meaning and a specific code for their family depending on the region where they lived. That story shortly resumed here had a great impact on Thiriez who recurrently applies those motifs in his work and continues his researches.

Thiriez’s work (Prologue) shows a duality between old and new, traditional and contemporary, obscure and colourful. Born in a generation where the technology has appeared in a sudden and has changed the society erasing slowly a conventional model of life, Thiriez looks at the folklore and the wildlife to get the wisdom to question the conventional values in the present-day. He recreates his own model starting from what he knows from the past and what he gained from the present creating a transition between generations.

*2016 « when did we stop playing 2? » With Berneihmer contemporary at Kremers Gallery, Berlin

*2016 « When did we stop playing ? » Bernheimer contemporary and Anna Laudel, curated by Isabel Bernheimer, Istanbul

* 2007 : Fine art school of Budapest; selected for a temporary exhibition.

Prizes in Art contests and other

* 2008: exhibition Drouot Montaigne, Paris and creation of a quotation